Brian Loveday (1978) published a scale-up procedure for autogenous pilot plant power draw to industrial sized machines that used an empirical power number to encompass all the motion effects of a mill charge. Derek Barratt (2002) derived a set of power numbers for industrial machines for use in Loveday's base formula, where a power number for a particular mill filling and speed are read from a chart and then charge density, including the ball load, are fed into Loveday's formula to predict SAG mill power draw.

The power numbers that Barratt published are based on mills with 'typical' cone-ends (probably 15° to 25°). A flat-ended (shell-supported) mill is expected to have 5% less power draw.

The formula for ρcharge is as follows: 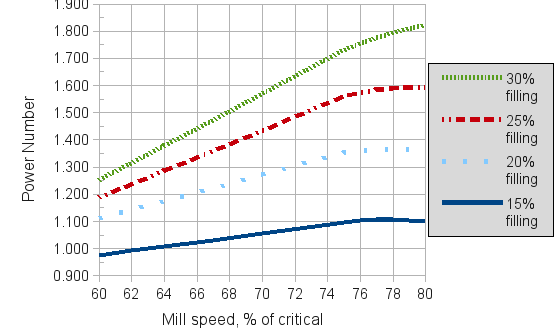 The paper comparison of SAG mill power models published by Doll at Procemin 2013 suggests that this model predicts power draw about 10% high when the mill speed is below about 78% of critical. This model is not recommended for doing throughput or mill sizing calculations, but is a conservative (good) model to use when selecting the motor size for a mill.