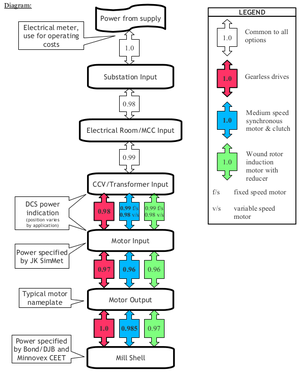 Each piece of an electrical network introduces electrical loses such as voltage drop (resistance and heat) and alternating current phase misalignment (power factor). Mechanical loses occur between a motor output shaft and driven equipment, such as heat losses in gearboxes and pinion gears. Because of these cumulative power losses, the actual amount of power declines as it travels through an electrical and/or mechanical network.

Power measurements are made relative to a certain position in an electrical network. The location where a measurement is made is often different to where a power model is valid, and a conversion between the power relative to the two locations in the network is needed.

Power at the Mill Shell

Power models in SAGMILLING.COM are all expressed relative to the mill shell for both specific energy consumption (eg. Esag, kWh/t) and for mill power draw models (eg. Nordberg ball mill power prediction for a mill geometry). This relative to the mill shell definition roughly corresponds to the amount of energy that ore consumes given an efficient set of mill bearings, liners, etc.

Power at the DCS

A Distributed Control System (DCS) consists of a set of sensors in the plant that send information back to a central processing computer that turns the sensor information into actual measurements. For example, given a single-pinion synchronous motor system where:

Losses of power are combined by multiplication.

Continuing the example above, if the DCS indicates a 5100 kW power, the corresponding power at the mill shell would be calculated as follows:

Warning: This approach generally neglects significant power factor loses. If a mill drive system is being used for power factor correction at the minesite, then a site-specific network diagram with the actual loses including power factor must be created.